DB pensions now worth more than property for most of Britain

The value of people’s DB pension outstrips average property value in the majority of areas of Britain, according to new analysis from Hymans Robertson.  As the latest ONS figures1 show property values falling by another 0.2 per cent and an expectation that the decline will continue, the leading pensions and financial services consultancy warns people to be aware of the importance of fully understanding their DB pension asset as they plan for the long-term through the expected recession. This is particularly true given how vastly different it looks regionally across the country.

Commenting on the importance of valuing a DB Pension as much as property assets, Calum Cooper, Partner, Hymans Robertson, says:

“DB pensions are a core part of long-term financial planning and for those 11 million people who are fortunate to have one should think twice before being tempted to dip into them for easy cash as we head towards more challenging economic times.  As lockdown continues and then the predicted deep recession begins to bite people may sadly start to feel cash starved and may look to pensions for cash.  So, it is so vitally important that people fully recognise the true worth of their pension alongside what is commonly considered the primary asset: the investment they have in their property.  Pension is there for the long term and not an asset that should be hastily dipped in to without considering the consequences for independence in later life.”

Overall across the UK average house price was £231,885 at the end of March1 while the average value of DB pensions was £233k per person2. 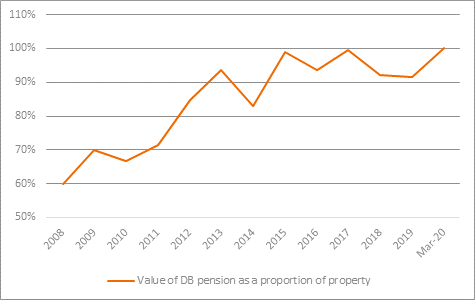 Brexit uncertainty means for the first time ever, pensions values could…

Brexit uncertainty means for the first time ever, pensions values could…