£15 billion a year could be raised from the over-40’s if the UK adopts the German model of social care tax, according to research from Hymans Robertson. This is one of six options likely to be put forward for tackling the crisis in social care in the upcoming green paper expected before Christmas. Looked at in purely financial terms this policy would provide much needed funding into a system already at breaking point. The situation is widely expected to get much worse, with the funding gap to deliver an adequate service projected to increase to £30bn per annum by 2031, underscoring the need for radical change.

In its report ‘A better future for adult social care’, the leading pensions and risk consultancy calls for cross party political bravery to address the crisis so that older adults and their carers can be treated with the dignity and respect they deserve.

“There are no two ways about it, the system needs more money. It needs a healthy injection now and even more in the years to come. Taxation of current and future generations will be needed. It is never going to be popular. But, as importantly, funding needs to be ring-fenced and spent well. Prevention should be prioritised, both to improve the lives of individuals as well as to manage down the costs faced by society.

“There are many families, carers and individuals who are completely unaware of the state of social care in this country. When confronted with the reality they are shocked. Surveys by the King’s Fund suggest that most people don’t understand how social care funding works. They don’t make a distinction between health care and social care and believe the NHS will look after them. This leads to a rude awakening when a loved one needs to use the system.

“This lack of understanding makes addressing the crisis a huge challenge politically. 1 in 10 of those reaching age 65 will face care costs of over £100,000. Yet our research found that 42% of adults don’t ever expect to save for care and almost half (47%) underestimate how much it costs**.  According to longevity experts, Club Vita, most people underestimate how long they are likely to live***.

“Overcoming this lack of awareness is arguably the biggest challenge we face. Otherwise all options to address the crisis will be met with fierce criticism and resistance. Politicians of all hues need to be open about the scale of the challenge with a population that doesn’t understand the severity of the situation today, never mind in the future. The imminent green paper is a massive opportunity to raise awareness and galvanise change. Now is the Government’s chance to put this right.”

Explaining the scale of the funding gap, he added:

“To fund a sustainable system, offering a decent level of dignity, while protecting individuals against catastrophic costs would, by 2031, cost nearly £30bn above the projected level of available funding. This is equivalent to a quarter of the entire NHS budget for 2017/18, or the size of the whole budget for secondary education. This demonstrates the yawning gulf between where we are and where we might modestly aspire to be.

“To explain the £30bn figure, the King’s Fund claims that to revert to 2009/10 levels of funding would cost an additional £6bn pa by 2021 and £15bn by 2031. On top of that, a fundamental step to encourage the development of a private sector care insurance market is a £75,000 cap on fees paid by individuals.  This would also limit catastrophic care costs that the unlucky few suffer.  This is often proposed hand in hand with protection for people’s assets for up to £100,000, to allow them to protect some assets for example to pass on as an inheritance. This would cost an additional £4bn of funding every year by 2021 and £6bn pa by 2031. Then to offer free personal care in England would be a further £6bn pa by 2021 and £8bn pa by 2031.”

Commenting on what can be done to plug the funding gap, Jon adds:

“The imminent green paper is expected to put forward a number of different options to address the current crisis. One is rumoured to be a tax of 2.5% on income for the over-40s, split between employer and employee contributions ring-fenced for social care, similar to the system in Germany.  This would raise £15bn per annum which would be a huge step forward. However all potential policies need to be assessed against adequacy, sustainability and fairness in the context of likely future demographic shifts. And however the money is raised it needs to be spent well, focussing on prevention and people-centred health and social care provision.

“Collectively we’ll have to pay for the care we receive somehow, either through taxes, insurance, directly, or drawing on assets or homes.  We support a model funded by a partnership between the individual and state, spreading risk to prevent care costs leading to financial ruin and to make sure the burden is spread fairly across generations.  Funding should be invested in a way that saves money in the long run.  But at the same time it must visibly improve people’s lives. It is time to treat older adults with the dignity and respect they deserve.”

Noting the demographic challenge ahead, he added:

“The majority of care people receive is informal, from family and friends.  The National Audit Office estimated the replacement cost of this care delivered by 8 million people and it was over £100bn.  If you add that to state funded and self-funded care, as an industry care is bigger than the NHS, at well over 5% of GDP.   Data on this huge industry is incredibly scarce.  To fully understand the issues and manage them better we need better information on what is happening.

“Yet demographic changes are likely to reduce the amount of informal care on offer.  At present there are over nine 15-75 year olds for every adult over 75, but by 2050 it is projected that there will be less than 5****.  In other words, there will be around half the number of younger adults for each older adult. As a society we need a plan to help us deal with these pressures. “

Explaining how the insurance industry must rise to the challenge, Richard Purcell, Technical and Innovation Lead, Life and Financial Services, Hymans Robertson says:

“There is an obvious role for insurers in the provision of social care. But currently it’s difficult for insurers to fill the gap meaningfully without a government cap on care costs. Without this, products, such as those that give the ability to draw down on conventional life insurance policies, do not give customers complete indemnity, hindering their success. This, along with a poor appreciation of future care needs amongst customers, is why attempts in the past to create care insurance products haven’t taken off.

“We hope the importance of introducing a cost cap is recognised in the green paper, allowing for a partnership to emerge between the individual and the state, where the government picks up the bill above an agreed cap, and insurance is used as a cost effective way for individuals to manage the cost of their care up to the cap.”

“The rich can self-insure against future care costs and the poor will end up relying on the state. But a large group in the middle might welcome a new financial product which would ensure that their care costs were met and the family home was protected for the benefit of future generations. One way to design such a product would be to combine insurance with existing pension drawdown products. Growing numbers of people will in future reach retirement with a defined contribution pot. As these grow in size, more and more people could countenance paying a lump sum premium at retirement so that any future care costs would be met by their insurer rather than funded out of the value of their home. Such a policy would be more attractive if government agreed that premiums into this form of insurance could be paid directly from the drawdown account to the insurance provider tax free.” 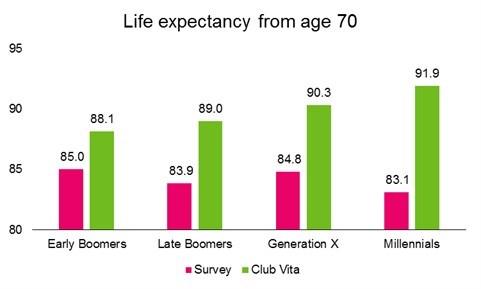