Year end results and the impact of COVID-19

by Nick Ford
Head of Transactions

Following the release of insurers’ 2019 Reports and Accounts, we take a look at the movements in solvency coverage ratios, how insurers are generating surplus, and how COVID-19 has impacted insurers’ solvency position. 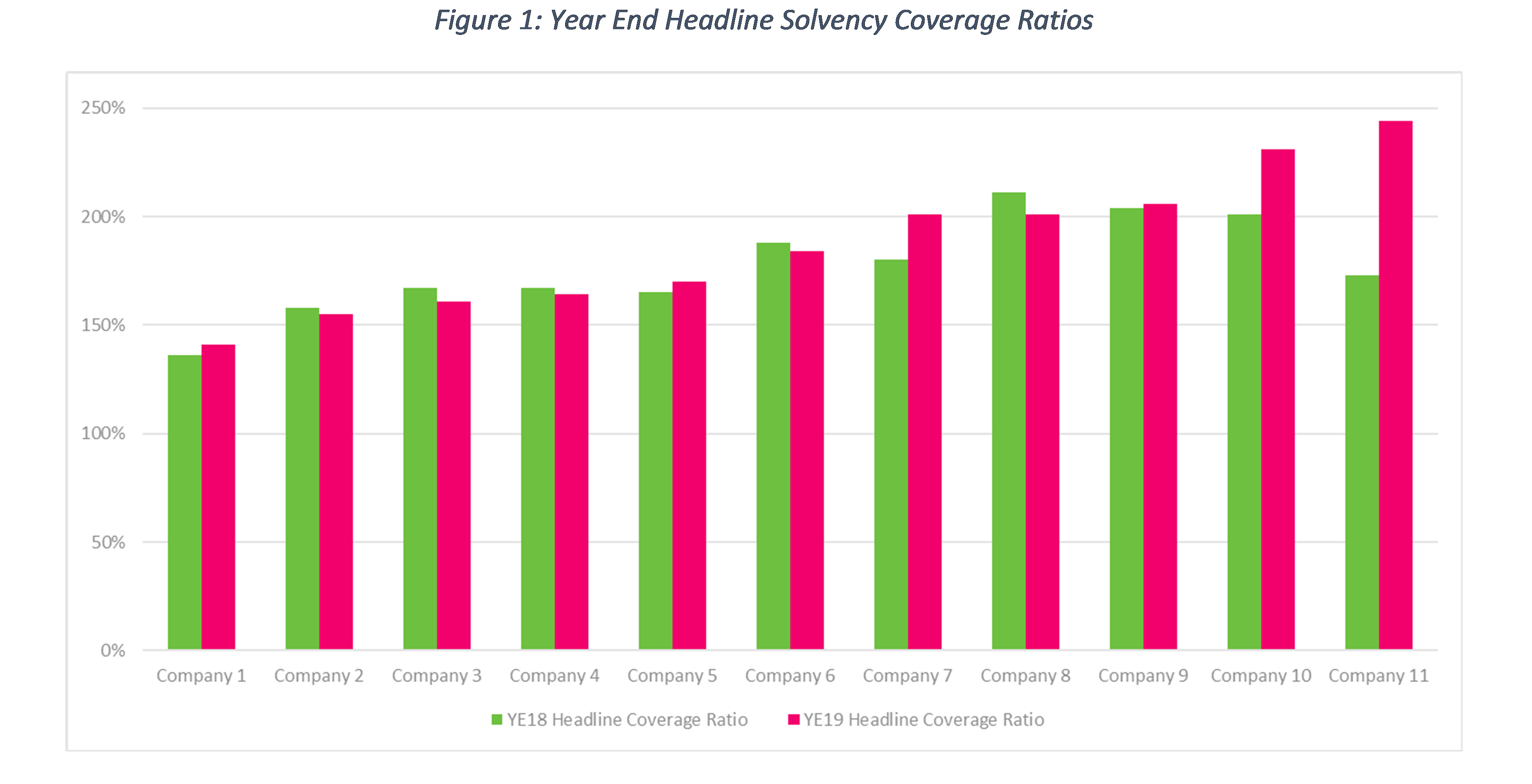 Note that caution should be exercised when comparing the Solvency Coverage ratios reported by different firms – the ratios are not intended to reflect or confirm the relative strengths of different firms. There are some significant differences in how various firms calculate their Solvency Coverage Ratios, in particular around the inclusion of ring-fenced funds.

Half the companies in our sample disclosed an increase in their ratio and half disclosed a decrease. For most companies, the change in ratio was not material. The drivers behind increases in ratios included issuance of debt, one-off sales of business and regulatory model changes. Decreases in coverage ratios were largely driven by adverse market movements, new business strain and capital transfers.

Firms continue to disclose a range of sensitivities for their headline solvency coverage ratios. These illustrate how the ratios would change in response to factors such as movements in interest rates, equity market levels, credit spreads, longevity and mortality assumptions. The chart below shows the absolute increase or decrease in firms headline solvency coverage ratio after a 50bps decrease in interest rates, a 20% fall in the value of equities, and a 100bps widening in credit spreads. These are not always directly comparable and so we have scaled these linearly, to provide an approximate comparison.

Some of the sensitivities have been scaled to give an estimate of the impact for stated sensitivities. This scaling has been done to allow a comparison between firms and assumes linearity of Solvency Coverage Ratio impact.

A 20% reduction in the value of equities results in a reduction in all but one company’s ratio, presumably due to over-hedging. The average reduction was 5 percentage points.

The impact of a 100bps widening in credit spreads varied – one firm stated it would materially increase the coverage ratio (presumably due to interactions with the matching adjustment under stress), one stated a negligible impact, and the other firms stated that it would reduce their ratio.

The table below shows the surplus generation over 2019 for a sample of insurers. 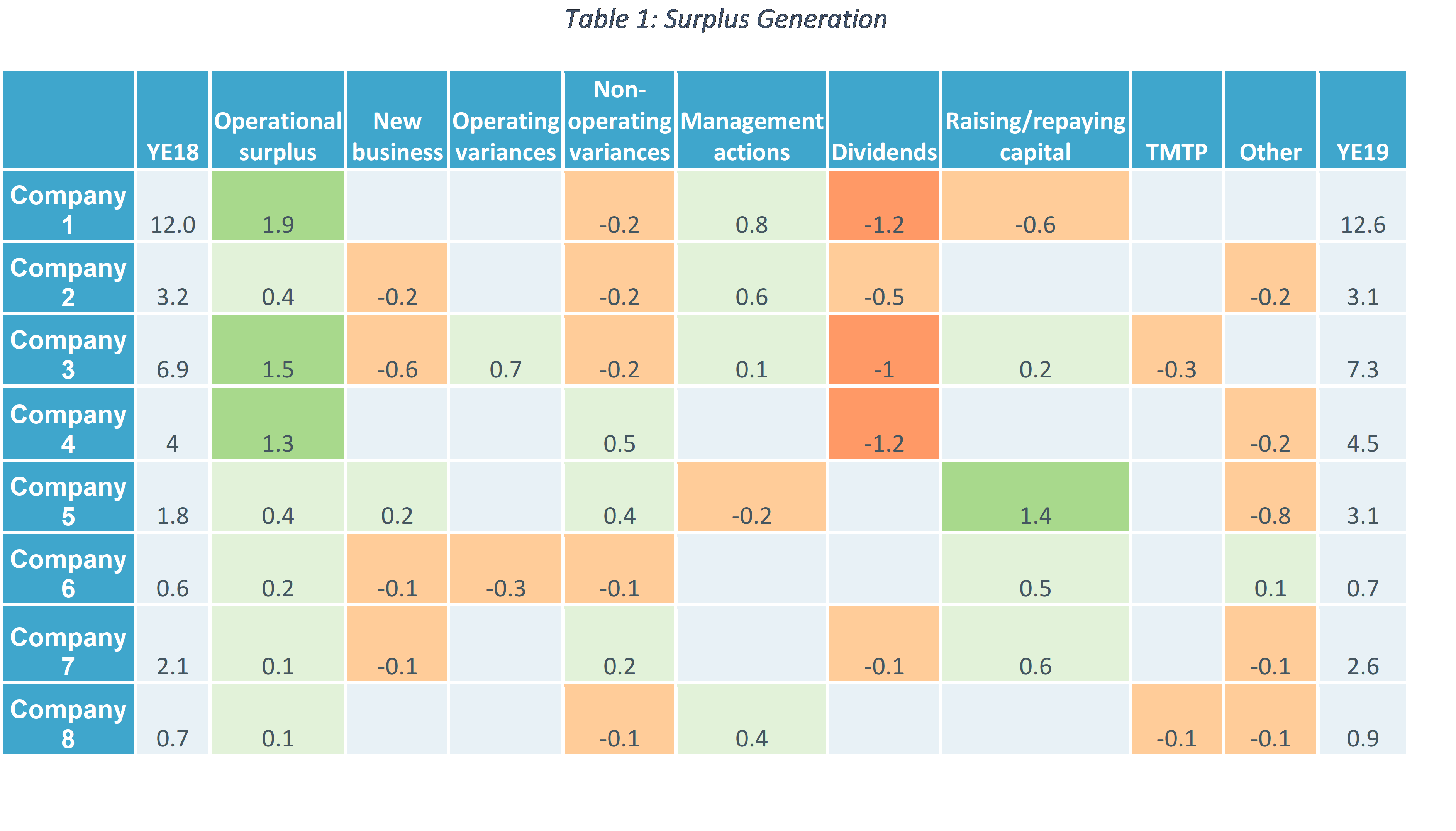 Note that we have allocated the surplus generation drivers provided by insurers into broader categories.

The majority of insurers increased their surplus over 2019 – this is primarily due to market movements not having a substantial impact on the surplus this year. In general, companies will seek to be able to pay capital transfers (i.e. dividends, share buy-backs etc) from their operational surplus. This is the case for most companies, although for some it is fairly tight. Management actions included optimising investment/hedging strategies and Matching Adjustment funds as well as beneficial impacts from regulatory model changes.

Market volatility and its impact on insurers’ solvency position

The sections above considered insurers’ positions at year end 2019. However, since then there has been considerable market volatility and the following graph shows the movements in key market factors since the beginning of the year. 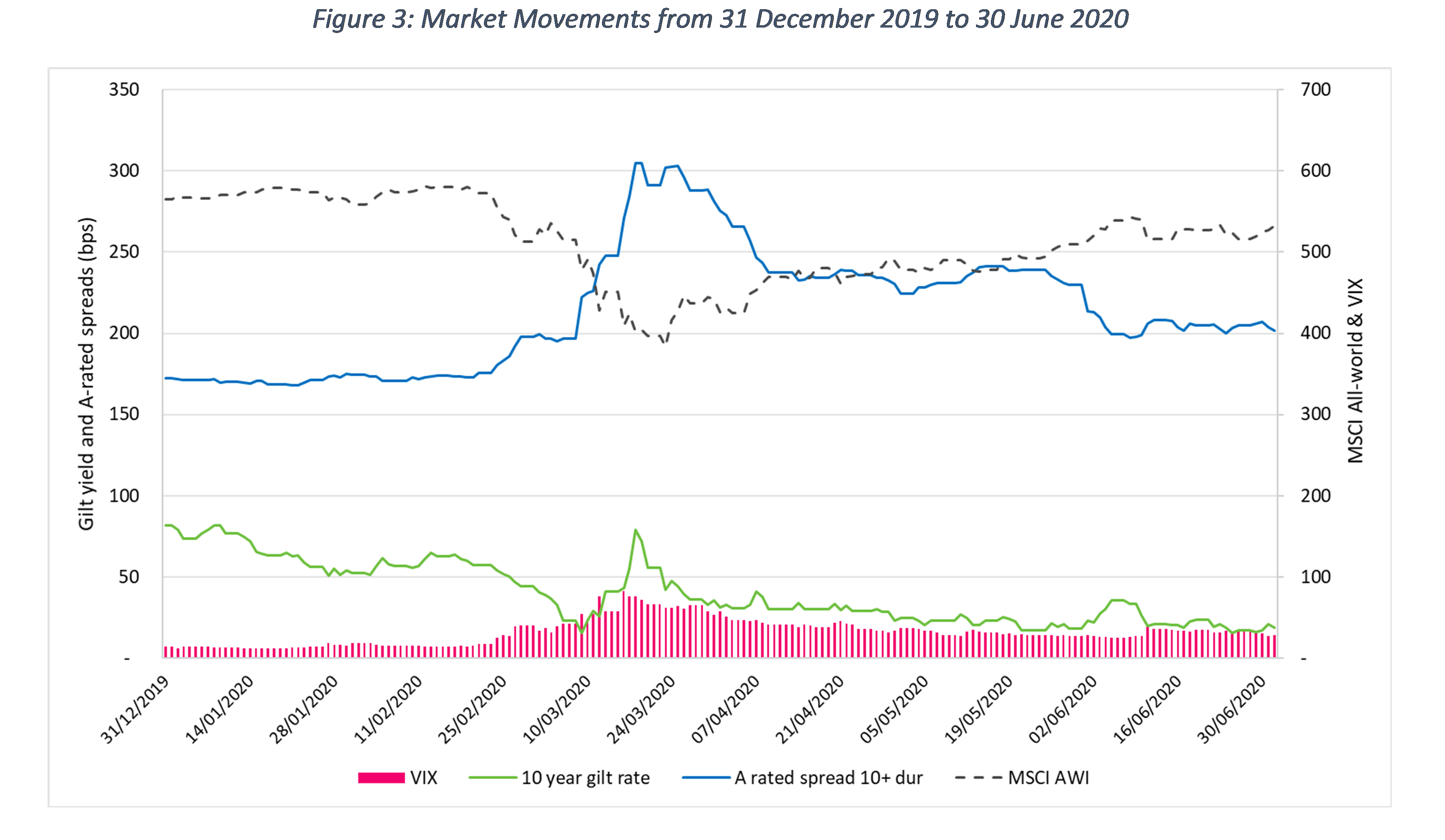 As can be seen, the value of equities has fallen, spreads on corporate bonds have widened, yields on gilts have decreased and the VIX equity volatility index saw an all-time high. The most extreme market movements were seen in March, around the time the World Health Organisation declared COVID-19 a global pandemic. 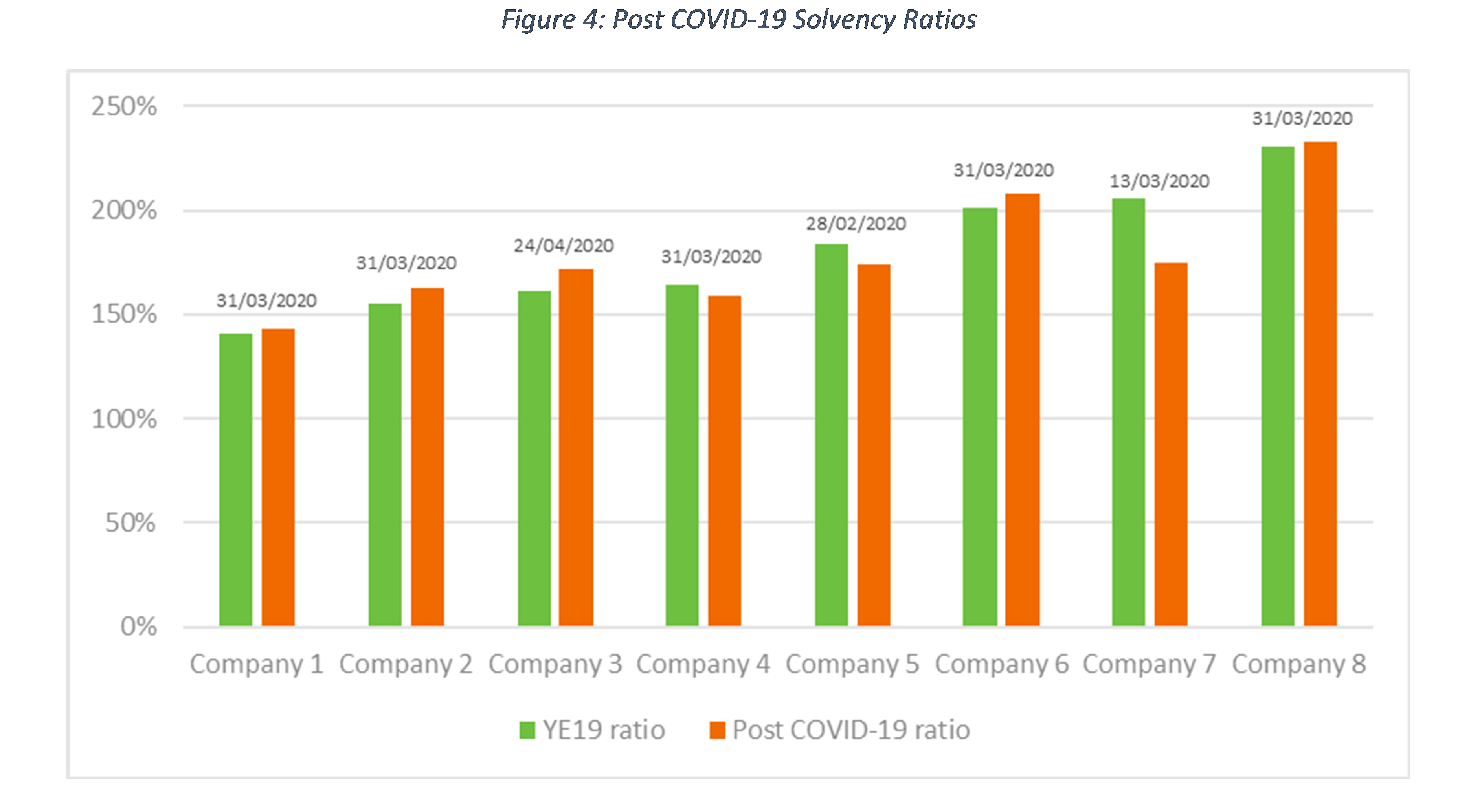 The date at which the Solvency Coverage Ratios have been restated are shown above the bars.

The majority of insurers’ disclosures of COVID-19 impacts stated that movements were in line with disclosed sensitivities. It is also noteworthy that the impacts are relatively small – in line with those sensitivities. Of the 8 firms in our sample, 5 reported an increase in their restated solvency coverage ratio and 3 reported a decrease. Whilst most of these movements were driven by market movements, some insurers did note they had written new business within the period and raised additional capital.

The non-uniform nature of these movements highlights that the solvency ratio does not give full information on a company’s performance. Own Funds are very likely to have decreased for all companies in the above but, if the SCR has decreased by proportionately less, the ratio will increase. This highlights why surplus and cash generation disclosures continue to be a key source of information for analysts and investors.

In recent weeks markets have stabilised slightly, however future uncertainty remains as to how long it will take for the crisis to fully flow through the credit markets in the shape of defaults and downgrades, with a number of observers expecting it to take 18 months to 2 years. There is also the possibility of future market volatility if we have a second wave of COVID-19. As a result of this, insurers will continue to consider all the options available to them within their capital management toolkit.

Insurers will also need to consider how the past and potential future events will impact their half-year and year-end assumptions and internal model calibrations. Given this, insurance industry participants, investors and analysts will be eager to read insurers’ half year and year end disclosures.

Hymans Robertson has a wealth of investment, risk and capital optimisation and Solvency II experience. Our consultants would be delighted to support you. If you would like more information, please get in touch.