With the year-end 2018 reporting period now concluded, we reflect on how firms’ Solvency Coverage Ratios have moved over the course of 2018.

Figure 1 below shows the trend in reported headline Solvency Coverage Ratios from year-end 2017 to year-end 2018. Each coloured line represents a different firm. 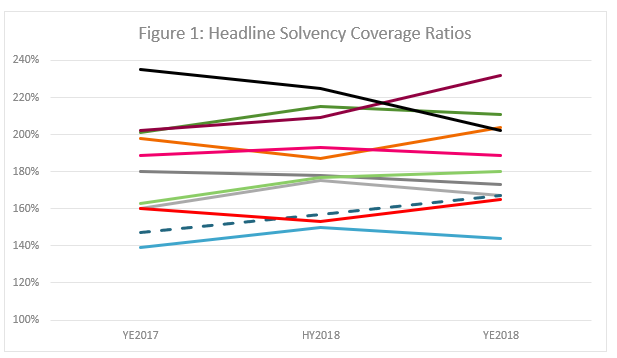 In its 2018 Reports & Accounts, one company restated its year-end 2017 Solvency Coverage ratio to align with the basis used for year-end 2018. It did not provide a restated figure for half-year 2018 so we have used a dashed line to represent that the half year 2018 ratio is only a linear estimate.

Note that some of the stated year-end 2018 ratios include the effect of a recalculation of the Transitional Measure on Technical Provisions (TMTP), of which some are “notional” and others are PRA-approved.

Note that caution should be exercised when comparing the Solvency Coverage ratios reported by different firms – the ratios are not intended to reflect or confirm the relative strengths of different firms. There are some significant differences in how various firms calculate their Solvency Coverage Ratios, in particular around the inclusion of ring fenced funds.

Given the relatively modest increases in interest rates witnessed between year-ends, the majority of these observed changes in Solvency Coverage Ratios appear to have been due to a variety of firm-specific reasons and management actions.

The image below sets out some of the reasons firms have stated for the observed movements in their Solvency Coverage Ratios over 2018.

Firms continue to disclose a range of sensitivities for their headline Solvency Coverage Ratios. These illustrate how the ratios would change in response to factors such as movements in interest rates, equity market levels, credit spreads, longevity and mortality assumptions. Interest rates continue to be one of the most material risk factors for headline Solvency Coverage Ratios.

Figure 2 shows the absolute increase or decrease in the headline Solvency Coverage Ratio where there is a +/- 50bps parallel shift in interest rates. 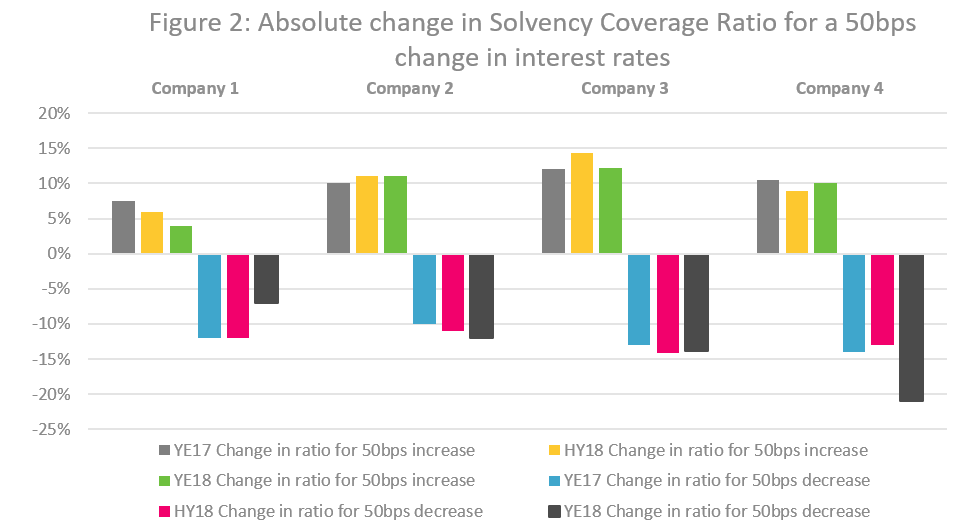 Source: Company year-end reports and accounts, SFCR’s as at 31 December 2018

In Figure 2, some of the sensitivities have been scaled to give an estimate of the impact for a +/- 50bps parallel shift in interest rates. This scaling has been done to allow comparison between firms and assumes linearity of Solvency Coverage Ratio impact. All the companies shown in Figure 2 have allowed for TMTP recalculation in their sensitivity analysis.

These sensitivities highlight the potential material impact on Solvency Coverage Ratios that volatility in financial markets, particularly interest rates, can have.

Given the relatively modest increases in interest rates witnessed between year-ends, the majority of the observed changes in Solvency Coverage Ratios appear to have been due to a variety of firm-specific reasons and management actions.

However, the material impact on Solvency Coverage Ratios that volatile markets can have, particularly interest rates, remains unchanged.

With the political and regulatory uncertainty that lies ahead, it is therefore no surprise that firms have been looking at their interest rate hedging frameworks to ensure hedges will deliver the protection they need under potentially turbulent and stressed conditions.

Hymans Robertson has a wealth of investment, risk and capital optimisation and Solvency II experience. Our consultants would be delighted to support you. If you would like more information, please get in touch.

The material and charts included herewith should not be considered a definitive analysis of the subjects covered, nor is it specific to circumstances of any person, scheme or organisation. It is not advice and should not be relied upon. Hymans Robertson LLP accepts no liability for any errors or omissions.