Climate change has been a topic on all investors’ agendas over recent years. Trustees and pension committees have started to grapple the funding and investment consequences of climate change, developing climate policies, undertaking scenario analysis and debating divestment. This is just the beginning.

At a broader societal level, some feel inconvenienced by the actions of the school strikes and Extinction Rebellion who protest the climate emergency. This inconvenience in the here and now seems to matter more than the longer-term consequences we all may suffer. The potential impacts of climate change seem distant, both in time and geographical terms, yet to many they are being experienced now through the more frequent occurrence of extreme weather events.

Rebecca Craddock-Taylor, a former colleague, recently spent time volunteering in Puerto Rico, which was devasted by a hurricane in 2017. This is her story.

The population of Puerto Rico have personified Hurricane Maria. They do not refer to the hurricane as a hurricane, but simply as ‘Maria’. Every conversation is punctuated with references to ‘Maria’. I can understand why. In 2017, she entered the homes of every family in Puerto Rico and she remains firmly in place at the head of the table. Her presence is silent now, but her impact remains vivid and inescapable.

Earlier this year, I volunteered in the town where ‘Maria’ first made landfall, Yabucoa. I was there to help rebuild and repair the homes of those affected by her winds which tore through the island at speeds of over 155mph and lasted almost 24 hours. During my time in Yabucoa, I worked on numerous homes and met many homeowners who survived Maria but continue to be affected by the repercussions of her initial torment.

We usually talk about the physical effects of climate change – temperature increases, sea level rises, forest fire size. But as the news reports start to slow after the events occur, we forget or are unaware of the lasting social impacts on people's homes, income and health. Being in Puerto Rico 18 months after Maria, I saw for myself that climate-related weather events have far reaching social and economic implications.

Census data estimates that almost 4% of the population left Puerto Rico after Maria (today it is c. 2.9m people). This was the largest population drop in the island’s history and the implications for communities, families and the economy of Puerto Rico is profound. The chart shows the population before and after Maria. 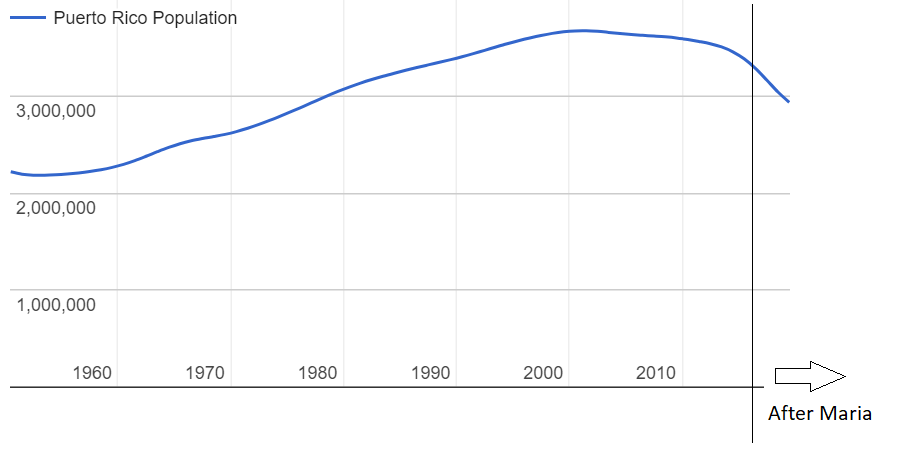 Migration due to climate change is now expected to drive the majority of the movement of people across the world. As climate-related weather events become more regular and increase in severity, certain ways of life will become unsustainable. People will have no choice but to reassess their homes, their jobs and their way of life.

The GDP of Puerto Rico fell over $3bn in 2018, which is assumed to be closely related to loss of small businesses, reduced tourism to the island and fall in population. There is no doubt that the failure of governments to rebuild communities soon after Maria arrived affected the growth of this island.

GDP of Puerto Rico (US$ billions)

Puerto Ricans experienced lasting trauma during the 24 hours of Maria’s full force that most of us cannot comprehend. It has stayed with each person I met and full recovery is still a long way off.

The most memorable house I worked on was situated on the coastline where Maria first made landfall. The houses there didn’t stand a chance. Our homeowner decided to rebuild his home, but he was starting from the bare bones. During the project he became increasingly depressed and sadly he took his own life. He was one of many.

In the three months after Maria, the island’s suicide hotline experienced a nearly 250% increase in calls from people who said they had attempted suicide compared with the same time a year earlier (before Maria). In addition, a study of Maria's impact on mental health found that 30% of children reported that they perceived their lives or the lives of people they loved to be at risk – a strong predictor of post-traumatic stress disorder (PTSD).

The costs to an economy of depression and other mental health problems is staggering. There are no specific details of the costs of the depression caused by Maria, but a study by the London School of Economics calculated that 1.2% (on average) of a country’s GDP is lost due to workers with depression attending work while unwell.

Maria was skillful at cracking or slightly moving roofs so they became unstable. As a result, water has been seeping into the walls, creating the perfect environment for black mould.

Families have continued to live in homes covered in mould as they wait for help from volunteers or the government. But volunteer organisations have long waiting lists and state support has been in high demand.

Inhaling or touching mould spores can cause allergic reactions and asthma attacks. I entered each house wearing a specialised suit and breathing mask to treat the mould, but the owners, with no other option, continue to live in their homes with no protection. Most of the homeowners I worked with either had respiratory issues themselves or their family had problems. I suspect these problems are exacerbated given only 35% of Puerto Rican’s have employer sponsored health care (compared to 60% in the US) and instead rely on statutory capped Medicaid services.

My time in Puerto Rico taught me that when storms like Maria hit, the effects on individuals and communities in the weeks, months and even years after must be understood in order to provide the right help.

The Puerto Ricans I met had been through more than I ever will, and whilst their trauma will always stay with them, they have found a way to use Maria as a way to connect to their wider communities. People became more reliant on their neighbours in the immediate aftermath and they were forced to share the little resources they had available.

Even two years later, they have nurtured this characteristic. Maria was uninvited, but the volunteers I worked with were invited in warmly with open arms. We were even invited to sit at the table once in a while to share their Puerto Rican hospitality in thanks for our work.

Whilst Maria will never leave, the people of Puerto Rico are beginning to find ways to improve their island in spite of her. I just hope she’ll hold off inviting her bigger and stronger hurricane ‘friends’ any time soon.

Climate change is a global issue. In the UK, we may be relatively immune to some of these physical impacts for now; others are not so lucky. We must provide leadership and strive to reduce carbon emissions so that others can follow. We must act because we live in an interconnected world where the actions that we take can and will have impact elsewhere.  But above all, we can no longer presume that doing nothing is an acceptable response.

Our ask of pension committees and trustees is to answer the question: “what are we going to do?”. Asset owners need to recognise that they have power and influence, and behave in a way that reflects that power. They can change the funds they invest in, the benchmarks that they track and the investment managers they employ. Investment managers can and should be held to account for their actions and challenged to explain their engagement and voting decisions. Ultimately, capital can be reallocated.

What are you going to do?

Responsible Investment - cutting through the noise

Responsible Investment - cutting through the noise